Crunchy Cucumber Salad is made creamy–yet still healthy–with labneh, and the cukes hold their crunch with a quick drain after they are sliced. I consider this crunchy, creamy salad one of the greatest in my summer repertoire for three reasons:

Also: cucumber salad goes with everything, especially grilled meats and vegetables. Often the menu needs just a little something more, and quickly, to round it out, feed the crowd, or add some oomph. Answer is here. My crunchy cucumber salad is different from laban kiyhar, the classic, ubiquitous Lebanese “salad.” The star here is very much the cucumbers, which are given a little drain treatment to remove some of their water and keep their crunch on. The cukes are cut a little thicker at ¼-inch, and stirred up with a dollop of labneh rather than stirred into a deep bowl of yogurt.

I add a generous shower of mixed herbs, which marry perfectly with that fresh cuke flavor and the cool labneh. In laban kiyhar, I stay with mint only; here I’ll use everything I can: dill, cilantro, mint, basil, chive, tarragon. It’s all going in. Serve the cucumber salad cold. I make the salad ahead without too much water seeping from cuke to labneh, but I there is always a little water the next day in the chilled salad. No bother (hey, it’s summer; we care not at all): this is nothing a quick stir can’t fix.

Labneh  is my creamy-maker of choice over sour cream or mayo. Labneh, or Greek yogurt, has more body, and more complex flavor. If yours is bland or nonfat labneh, stir in a squeeze of lemon juice just before serving. 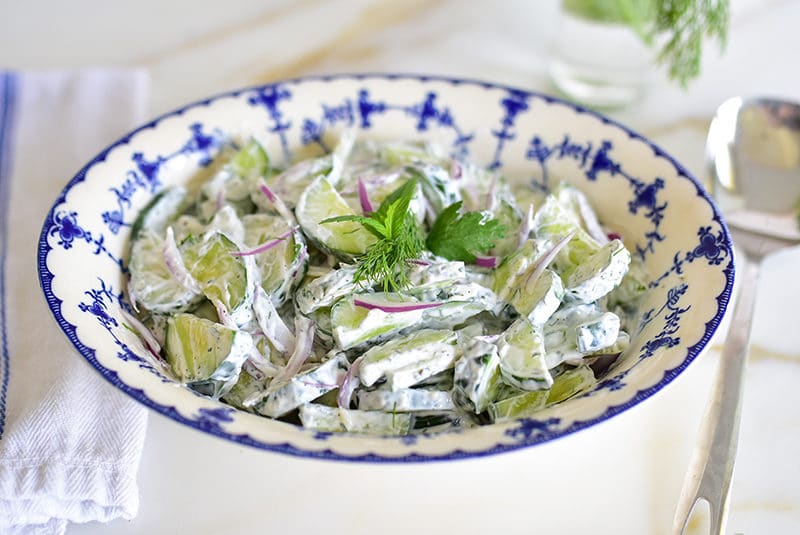 Maureen Abood
Keep the cucumbers crunchy by draining the slices in advance. This will also prevent too much water from seeping into the creamy labneh dressing; a little of this may still happen, but just give the salad a quick stir before serving, cold. Low-fat or non-fat labneh or Greek yogurt can be used here; add a squeeze of lemon juice to the salad before serving to boost flavor.
Print Recipe Pin Recipe
Servings 8