There are many versions of Lebanese ka’ik (or ka’ak), some biscuit-like and others bread-like. I grew up with the latter, a Lebanese glazed sweet bread which is fragrant with spices and subtly sweet. Eat the breads any time of the day: toasted for breakfast, as acompanion to a cup of tea in the afternoon, or as a dessert with coffee and fruit. Find the molds at Maureen Abood Market. At first everything seemed so small, which probably had to do with the narrowness of the streets and the way the homes were built almost up to the road. It was the second day of the trip to Lebanon that I had been thinking about about for the better part of my life, and already I felt a kinship with the very bedrock of the old country, a ubiquitous creamy stone that lies not too far beneath the topsoil. Along the highway leading to the village of El Mtein, one could see what appeared to be huge bites taken out of hillsides, revealing the stone underneath.

By 11 a.m., after a few stops to ask which way, we pulled up to one of the many stone houses—some rehabbed, others war-torn—lining the village streets. Waiting for us outside the front door were my cousins, along with the obvious matriarch of the family who is mother and grandmother to the clan all living together under her roof. She was holding a plate of her ka’ik (it was Easter season, and ka’ik is for Easter), offering it along with the kind of kisses that every Lebanese Sitti gives to her family and to all small children, Sitti kisses that are repeated over and over again against the cheek like a story too good to stop telling. 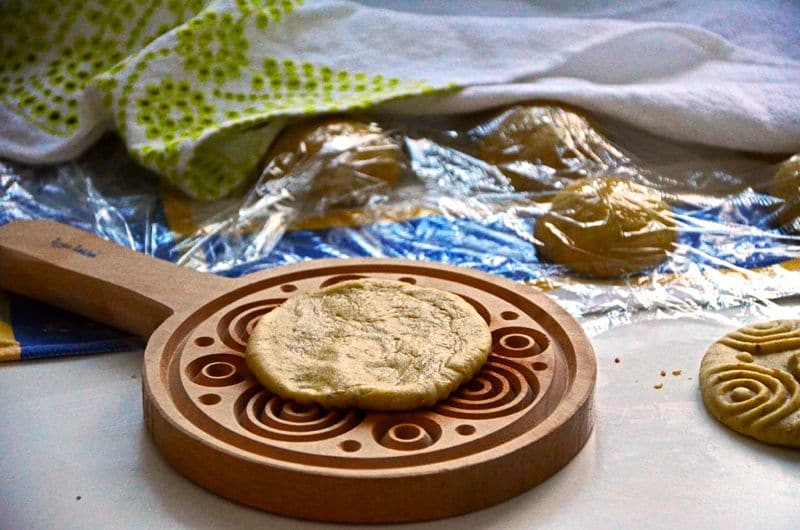 That none of us had met before seemed irrelevant as we recognized the family-feel in each other’s faces (it’s all in the eyes, honey) and hugged it out, reunion-style, there on the front porch. We started eating immediately the semi-sweet ka’ik, Rosalie’s being more biscuit-like than the bread versions we make. Watching my mother eat those cookies amid her people instructed me about the swoon response she has always had to the flavors of ka’ik, the mahleb and the anise: these are the flavors and fragrance of home, even a home and people she hadn’t met but always knew, in her own way.

Mom had said from the start that she would not make this trip to Lebanon with us, it was just too much for her, and then days before we left she heard me reading a message of welcome and anticipation that I’d received from her family. She looked around the table and announced, simply: I’m going. Inside, the coffee and cigarettes came out (the smoking there is as common as the little cups of intense Arabic coffee) as we dove into the family tree. Rosalie’s husband, rest his soul, is my mother’s cousin; their fathers are brothers. Turns out the family name, my mother’s maiden name of Abowd, was actually Nacouzi in Lebanon. This discovery was made by my cousin Mary years ago; she was the first of my generation in the family to venture to Mtein, so we weren’t taken aback by this news. But tracing the name to its roots suggests something of Greece, and once that came up we turned out attention elsewhere fast.

We walked around to the back of the house, where a rebuild was in progress. The front of the house was newer, but here in the back stood the original structure that is somewhere in the ballpark of 150 years old, and perhaps older. At the heart of this side of the house is the room where my grandfather was born. In the midst of its rehab, what we saw was dusty and dark, but even that couldn’t detract from the remarkable arched stone walls and ceiling. Must have been a spartan birth, and chilly in here, my mom said, probably imagining giving birth to her five children in a space like that. There were piles of the beautiful stone bedrock of Lebanon all around the construction site of the house, chunks that were heavy and laden with dust. One of the cousins must have sensed the magnetism the stone had for my mother, who was looking them over as though scanning for a lost treasure.

Chadi picked up a craggy stone and handed it to her; she accepted with the same deep breath with which she had accepted the ka’ik, the Sitti kisses. From the trip to Lebanon we brought home gold, we brought holy little trinkets from Our Lady of Mount Lebanon and St. Charbel’s monastery to hold us close to what we saw and did and felt. Above all we brought a piece of Grandpa Abowd’s home. Touch the stone, and a powdery dust lingers on your fingers like its own version of a Sitti kiss, just long enough to whisper its story in your ear now and again.

Maureen Abood
Ka’ik (KAH-ick) are known as Easter cookies and are traditionally made during the Easter season. There are many versions of ka’ik, some biscuit-like and others bread-like. This recipe is the latter, which is fragrant with spices and subtly sweet. The ka’ik freezes well, or keep at room temperature covered tightly and eat within a couple of days. But there is nothing like ka'ik fresh from the oven. I'm proud to share beautiful ka'ik molds for sale at Maureen Abood Market here.
Print Recipe
Servings 18 4- to 5-inch breads

For the sweet bread:

For the rose water milk glaze:

For the sweet bread: