Rich, brown-sugary pecan pie is made better with very toasty pecans and a whisper of orange blossom water. The flavor is as beautiful as it sounds: Orange Blossom Pecan Pie. 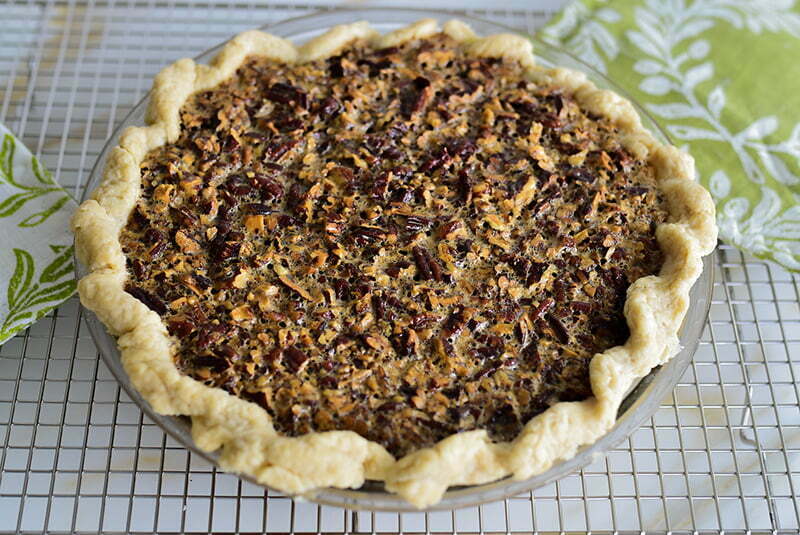 A shocking moment occurred during the development of this pecan pie recipe. My tester group (Dan and sons) was miffed when I brought plates of the pie to the table. When I say miffed, it’s really to say astonished.

“What the heck is this?” Michael asked.

“What the heck you talkin’ bout?” I asked.

When Steven learned the slice of heaven before him was pecan pie, his eyes got huge. “I always thought that was a pie to be avoided,” he said.

Even Dan chimed in with his revelation that he had never, not even once, had a forkful of pecan pie.

Aunt Louise’s assessment was invaluable: she’s always enjoyed pecan pie, though not as a favorite, but this one was GREAT.

If the occasion of taste-testing the pie is your first bite of pecan pie, your test notes are going to be a little different than say, mine, a veteran pecan pie baker and eater.

The recipe, I’ve found, need not change much from the traditional of eggs, brown sugar, Karo syrup (it’s okay here, if you ask me), pecans. Still, there are tips for baking your pie that will take it into another stratosphere: Toast the heck out of them. Taking care of course not to burn, which happens in a nanosecond with pecans. About 12 minutes at 350 degrees does it in my oven. The deep toastiness offsets the deep sweet of the pie and tastes only as all that is toasty does taste: incredible.

Also, chop the pecans. Though the top of a pecan pie with whole pecans artfully arranged is gorgeous, the cutting and eating of that pie is less than. Chopped pecans distribute throughout the filling better than whole pecans. Then, when you cut your pie, you can get nice, clean slices without having to try to cut through whole nuts that do not wish to be cleanly cut. Go for dark. Along the lines of the ultra-toasty pecans, dark brown sugar imparts deeper caramel, toffee-like flavor. Brown sugar is simply sugar with molasses in it. Dark brown sugar has more molasses than light. The aromatic extract: ORANGE BLOSSOM WATER! This pure flavor is simply made for anything to do with caramel. I still keep with some vanilla because I have to have vanilla here if only for the scent of it as I’m mixing the filling, then add equally as much orange blossom water.

You will notice that you’re not tasting flower water per se. As with the proper use of rose water, a whisper brings up the flavor of what’s being made rather than taking a starring role in and of itself.

If you can find anyone in your world who has never eaten pecan pie, perhaps this is their year for a bite. Which will lead to a whole piece, and loyalty to the pie forever more. Maureen Abood
What makes this pie recipe stand out from the others isn't so much the ratios or method as it is the ingredients. Go with dark brown sugar rather than light for more caramel flavor, toast the pecans deeply and chop them, and use orange blossom water in addition to vanilla.
Print Recipe Pin Recipe
Servings 1 9-inch pie