Tomato kibbeh is a flavorful mix of fine bulgur, onion, herbs, and ripe tomatoes with kibbeh spices. So good, tomato kibbeh might just make you forget the raw meat version…. When he told me he was more or less done with meat, I didn’t believe him.

It was last spring, and the brother of mine who is perhaps the most particular about food (and I do mean perhaps, since we’re all cut from that cloth), said definitively that meat was OUT. Complete vegetarian diet, IN. So I figured Richard’s new regime would not, could not, hold. Not up north. Not when we’re all together in July. What about burgers at Bar Harbor, bro? And fried chicken at Dam Site Inn? Even though he says he’s not rigid about the no-meat agenda, when neither of these naughty-good annual family outings budged him, I got seriously worried that we might never break meat together again.

Therefore, I had to bring in the big guns. Hello kibbeh dinner, feast of all feasts. I opened an array of kibbeh spices I’ve been collecting to share with Dicky specifically, since he is always reminiscing about the flavor of the kibbeh he used to eat in Dearborn when he lived out that way during his residency. This blend has whole dried mint leaves and rose petals and an amazing scent! That one has cumin and red pepper flakes and all kinds of other unidentifiable aromatics! Looksee and you’ll want raw kibbeh but badly!

He got into it and went at the mixing and the tasting like a true Lebanese cousin. The one who mixes the kibbeh has to also taste, right, as does everyone within earshot of “who wants to taste it?” But then there was the plate. I inspected his from down the table. I saw mostly fattoush (who can blame him? Ours is addictive.), with a little dab of kibbeh. You’d think I was the Inspector of Plates, and you’d be correct.

Why should I care so much if the guy eats meat or doesn’t?!

Here’s the thing: whenever Dick does something striking like this, it seems like I tend to follow suit. Copycat sister. When he started drinking two cups of regular coffee every day because it’s so good for you, along came me with her two cups (at least. + probiotic). And back in the day, there was the sushi. I ate my first raw fish with him, after years of sushi-longing but being too skittish to go for it. We went to a fresh, great spot in Chicago and he showed me the finer points of mixing wasabi with soy (tiny drops of soy at a time, to disperse the wasabi evenly). I’ve been eating raw fish with abandon ever since. Vegetarian? I can’t see it for me. No way.

But then, ask Dan and he’ll tell you my plate typically doesn’t fill with much meat. Instead, big heaps of salad. And did you know there is vegetarian kibbeh? Oh my GOSH, is it GOOD! Tomato kibbeh all spiced up with ripe garden tomatoes? Hi, I’m in love. Find it in my cookbook along with vegetarian potato kibbeh stuffed with lemony spinach. 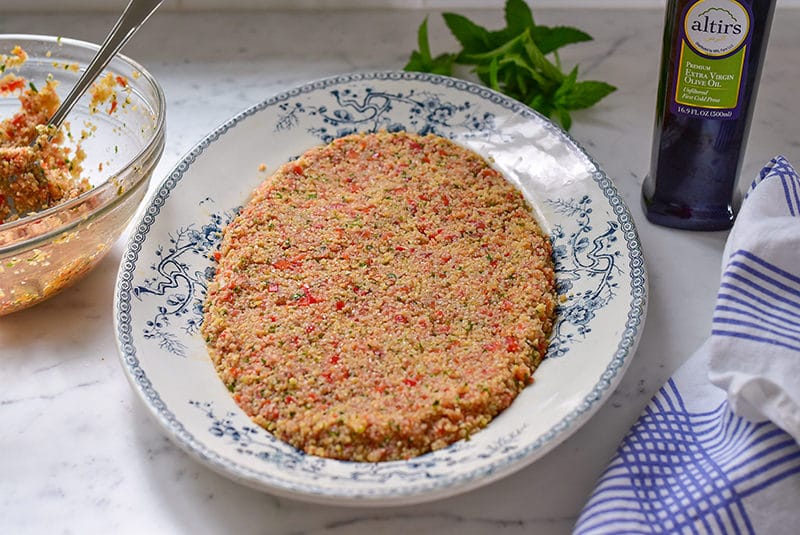 Of course, we know well that the Lebanese diet is rich in beautifully prepared vegetables, grains, and fruit, a vegetarian’s heaven of a way of eating. So good for you and so delicious in every way.

But a person really could eat like this, and go without meat forever.