Kibbeh footballs, or “arras kibbeh” is an incredibly delicious and beautiful way to prepare classic Lebanese kibbeh. The balls are shaped with the kibbeh and stuffed with househ, a lemony meat/onion/pine nut mixture. Read more about kibbeh meat here, and kibbeh recipes here and here. Try poaching uncooked arras in laban, comfort food at it’s best. Vegan tomato kibbeh is wonderful too! Try it here. 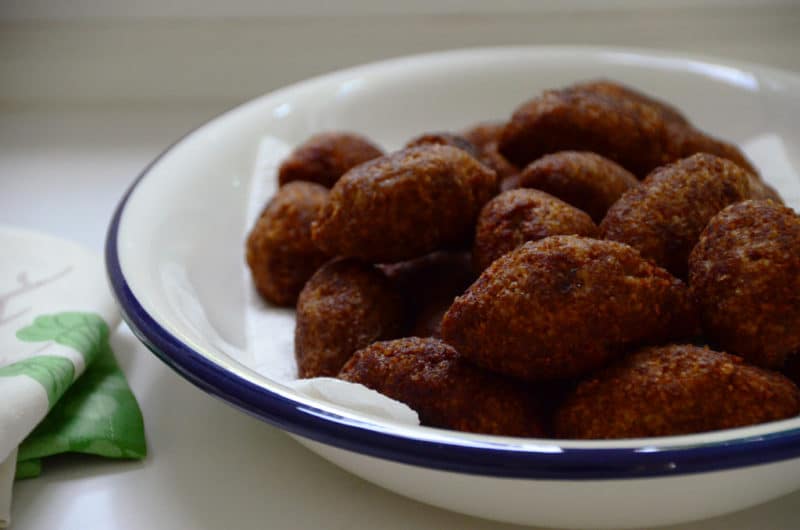 One of the many great things about my home state of Michigan is that there are lots of Lebanese populating the state. This translates to one’s ability to find good Lebanese restaurants pretty much around the corner, at least if you live in the Lansing or Detroit area. It is a luxury that we take for granted until we spend any amount of time in other places, where there is no such thing as good pita bread and certainly no such thing as a go-to Lebanese restaurant nearby. In East Lansing, you can get phenomenal, traditional Lebanese food from Woody’s Oasis. The Lebanese eat there, if you know what I mean. Woody’s has always made it seem perfectly normal to have foods like fatayar and arras kibbeh (kibbeh footballs) at events like tailgaters or your kid’s fifth birthday party, even when your last name is Smith. So if we were putting together a tailgate menu and decided to make the chicken but not the fatayar or the kibbeh footballs, that wouldn’t mean we’d be going without those delights. It just means we’d be getting them from Woody’s. But say you are making the kibbeh footballs yourself this time, and you grew up eating lots of them from Woody’s, and you discover that the perfect football shape doesn’t come so easy (more often my mom has made a round kibbeh ball or kibbeh patty-shape). Then you might ask to take a “tour” of the kitchen at Woody’s in hopes of catching a glimpse of one of the Sittos in the back shaping her footballs. Or you might get your booty on a plane and go to Lebanon, and take a class with a woman dubbed “the kibbeh queen.” I did enjoy making kibbeh with Georgina and our little cooking class at Tawlet in Beirut. I loved the restaurant and everything about being there, including the rosewater elixir that started our evening and the butter cookies (we’ll make them) that ended it. But I didn’t walk away having pocketed the secret formula, the golden ticket of kibbeh-shaping techniques that I had hoped for. We made big domes that were meant to be grilled, a specialty of northern Lebanon. Nice, but still.

I was, and still am, after the perfect shape, the football shape, that Woody’s puts out like a machine (but not) and that seems so elusive when the arras are made at home. I know, I know, the rustic look is so Saveur magazine. So real-deal. And no matter the shape, the arras are so savory and good that you can’t stop eating them even when there is a tin of seven-layer cookie bars, a bag of Snickers, and an apple in your pocket still to be had. It’s just that there is this part of me that craves the ability to make the perfect lines of a perfect kibbeh football the way my brothers crave a perfect Hail Mary touchdown or the perfect good-old-days of Lou Holtz.

The secret to making perfect kibbeh footballs is no doubt the same one that wins the game: practice, practice, and then practice some more. And if you love doing it while you’re at it, you’re going to play like a champion. Maureen Abood
The kibbeh balls are versatile—they can be shaped as patties, balls, or the traditional torpedo/football. They can be stuffed or not stuffed at all. One of the most delicious things you can eat is a kibbeh football right out of the fryer (but they can be baked). Kibbeh footballs are great for a picnic eaten room temperature, or served warm with tahini sauce or hummus, labneh, and good flatbread or pita bread. This recipe makes about 40 arras kibbeh.
Print Recipe