Lebanese eggplant boats are the traditional way to make Sheik al mehsheh, a meal “fit for a king”! Serve the eggplant over a bed of cinnamon-scented rice with a crisp, lemony romaine salad on the side. This dish is easily made ahead, as well as casserole-style. For some reason, our Lebanese eggplant, or Sheik al Mehsheh, has always been made by my mom as a layered casserole. Aunt Hilda, she loved to make her eggplant in the traditional stuffed Lebanese eggplant boats. The layered version is luscious, given lots of bake-time to meld the spiced meat/onion/tomato/eggplant flavors in a most delectable way. The boats . . . well, my brother Chris has on occasion told the story of eating them at Hilda’s for dinner with Ruth, and every time he looked down at his plate there was more eggplant boat there. Ruth was piling it on to Chris when nobody was looking, while she went for the savory filling in hers and his.

Aunt Hilda loved her version, though, and would say as only she could: “Your mother makes delicious sheik al Mehsheh. Delicious. But that’s not how the Aboods do it. That’s not how I do it, honey.” In other words: mine is better, honey. There was no question for her, or for me, that the boats look better. They’re distinct, tidy, and make it clear that you’re eating Lebanese eggplant boats and not Italian lasagna. (For Dan, this is not a good thing, since he’s “allergic” to eggplant. He’d rather the eggplant be indistinguishable, even if he’s not eating any. Because he’s allergic.)

In culinary school, we had many assignments asking us to make a familiar dish new in some way. I went for the eggplant boats, thinking I’d impress with a broad soup bowl with three filled halves, tomato sauce, and topped with the sautéed meat and onions and a dollop of labneh. I thought I’d cook the components separately to maintain the eggplant’s color and shape better. I thought it would be great. I had bragged up how delicious this dish is without realizing how important the long bake time is, how essential the melding of flavors. Chef loved how they looked but the message was: keep trying.

Which I did not, believing in my soul that the boats are simply an inferior Lebanese eggplant dish not at all worth my time. But I’ve wondered about them even as I relegated them, especially as I’ve perused the beautiful smaller eggplant at the market (not super small, just a little smaller than the globes). Not to mention all of the boats we have going in our lives up north on Little Traverse Bay. Every day it’s a question of the boat rides relative to the temperature, the wind, the timing, and etc. Recently we were awaiting my brother Tom’s arrival across the bay by boat. I said to Chris as we looked way out there, hey, is that Tom? He looked at me in total disbelief that I couldn’t distinguish Tom’s boat from the boat in question.

He said this deficit must be a matter of interest, and I’m just not interested enough to know. He wouldn’t know a brioche from a babka, he said.

What? I love boats (okay, maybe not as much as he does, but do see this and this and this and this and this) and he loves bread (no, not as much as I do). I guess it’s not that different from back when I was in junior high and cursing all that is geometry. He told me then that I must not have been that interested in doing well, and if I did want to do well, I had to apply myself, getting after the real homework in a real way every day, and I would get an “A.” He bet me $10 I could do it. (I know, what a cool brother, going all the way back. Today, he operates on brains and other interesting things like that) 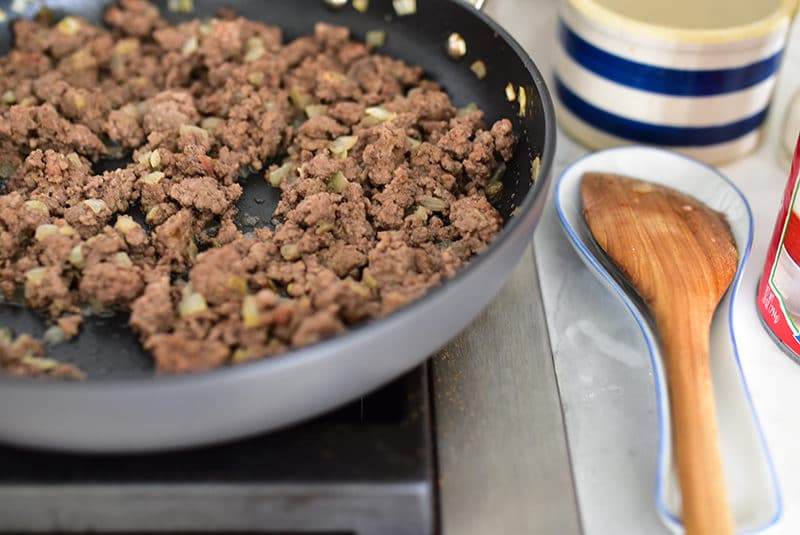 I did the math. I got the “A” (and the $10). And of course, my brother’s nod of approval, which was worth a lot more to me than the grade or the cash. And so: the eggplant boats. I did the homework, applied what I know, and here we are with a dish equally as good as my mom’s, one that nobody’s going to pass off to someone else’s plate. Maureen Abood
Lebanese eggplant boats are the traditional way to make Sheik al mehsheh, a meal “fit for a king”! Serve the eggplant over a bed of cinnamon-scented rice with a crisp, lemony romaine salad on the side. This dish is easily made ahead by a day or two and refrigerated before baking (or bake, cool, refrigerate for up to two days, then reheat covered in a 350 degree oven), or frozen (thaw overnight in the refrigerator before baking or reheating).
Print Recipe
Prep Time 20 mins
Cook Time 1 hr 30 mins
Total Time 1 hr 50 mins
Servings 6