My Mom’s no-butter pie crust is heavenly…ultra flakey with a hint of salt. And the kicker: no butter! Perfectly vegan. Use the 10-inch double crust recipe for single-crust pies (more dough to work with for crimping the edges; tuck the extra under the perimeter). Everyone who knows my mother knows that the hallmark of her character is grace. Pure grace. This is reflected in her face, her home, her kitchen, her conversations.

I love watching people taste my mom’s pie for the first time. Always, always (while chewing): what is this crust? Always, always: Mom glows. The fillings for my mom’s pies are excellent, traditional, and sturdy. What puts them and any good pie in a class by themselves, though, is the crust, her crust: golden, shattering flakes and absolute readiness to crumble when eaten (and not before). Hint of salt, so necessary against the sweet fillings. Above all, of course, is the flavor of this crust. Here is supreme taste where there is no butter, and a flavor of toastiness that defines the very notion of deep golden brown. I find that unless it’s my mom’s crust, I tend to leave on the plate whatever crust wasn’t touched by filling. Hers I will eat every crumb off my plate and yours too if you look away for more than a second.

My mom’s pie crust is the gold standard, a legacy that began in the kitchen of her own mother of all grace, Alice. Alice famously, and regularly, pushed a piece of pie across the breakfast table to my father, with her irresistible enticement that a little piece won’t hurt you. It wouldn’t be pie on any of our plates at home without someone saying those same words as they pass thick slices around.

So you want to know about the details already?! OK. 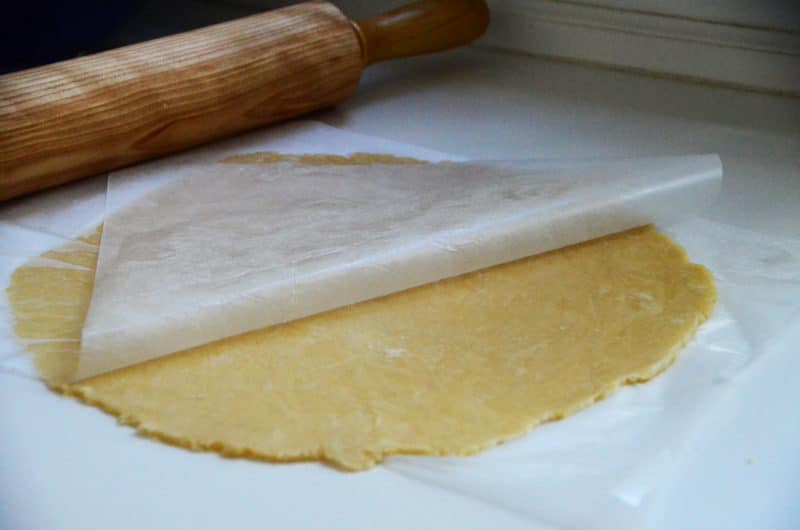 Here we have an old fashioned, Betty Crocker-inspired oil crust. My mother’s Betty book has been a workhorse in her kitchen, primarily for a singular recipe—the crust—which mom has always known deep in her hands. But the pleasure of opening that book, a book she made her own by covering it with a scrap of her cheerful kitchen wallpaper, to make a pie is ritual. The pies we’re baking right now are the ones we wait for all year: strawberry rhubarb. This pie is my mom’s favorite, for the sweet-tart flavor, yes, but also because this is always the first fruit pie of the year. Slip a drop of rose water in the pie, and there is yet another layer of fragrant beauty, graceful as the mother who made it. Maureen Abood
This oil-based crust is tender, flaky, and flavorful—everything you want in a pie crust. The dough for this crust is not chilled, so it's rolled out between sheets of waxed paper. The texture of the dough depends on many factors like humidity and how the flour and oil are measured. It’s best to scoop the flour into the measuring cup lightly, then level the top of the cup. Use a liquid measuring cup to measure the oil (like a glass Pyrex measuring cup with pour spout) to ensure the oil is measured properly. The dough should be fairly soft and pliable, not cracking and dry. If you’ve added all of the water and the dough still needs some elasticity, slowly add more oil, 1 teaspoon at a time. Use a pie plate with a flat rim for easy crimping. Recipe is based on Betty Crocker’s, and makes one double crust pie. Use the 10-inch double crust recipe for single-crust pies (more dough to work with for crimping the edges; tuck the extra under the perimeter before crimping).
Print Recipe