I took the first one in two bites. The second, in one bite.

This is what Dan said, when he was taste-testing the pistachio baklawa nests that I started testing well over a year ago.

He liked the “mouthfeel” of taking down his pastry in one fell swoop so much, that he now pops them one at a time. 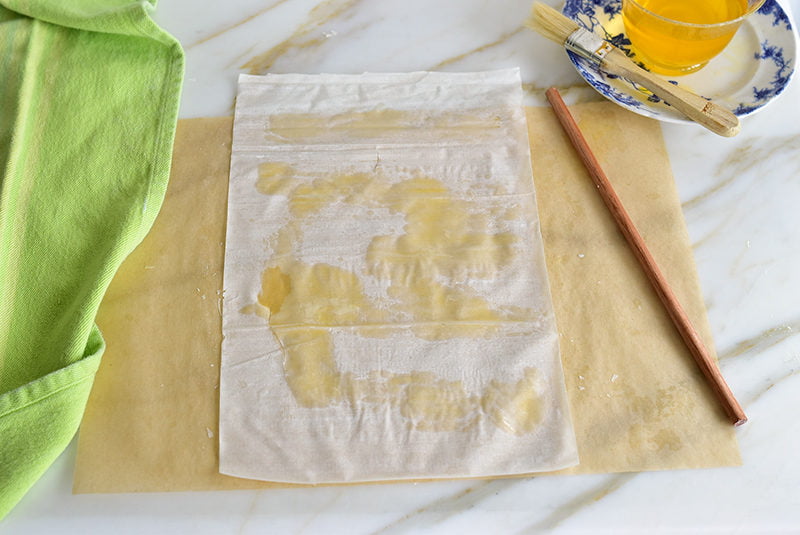 When an eater is that passionate, the baker is thrilled. Never mind that the baklawa nest—which takes a bit more effort, than baklawa diamonds (if you use Aunt Rita’s method)—is downed in just a single bite in the world that is Dan. But then, since when did the number of bites become the barometer of good? The Tootsie Pop, case in point: A-one, A-two, A-three. CRUNCH. Three, three licks to get to the center.

The nests may be a project, but they are a little project. There’s the dowel, on which the phyllo is pushed together to make the nest’s accordion pleat. There’s keeping the phyllo from drying out, which in this case is critical whereas with the diamonds, a little dryness in the phyllo, though not ideal, can be tolerated. And then there’s mastering the pushing together of the rolled phyllo. Let’s just say, good thing there are so many sheets of phyllo in the box, to give us a chance to mess up on a bunch and still end up with a tray full of baklawa nests. Expect test runs, and middle-of-the-project mess-ups, and know it’s going to be okay. Unlike baklawa diamonds, the nest is actually light. The phyllo is barely buttered, and the resulting ring is hollow. Filled with not much more than a teaspoon of ground nuts which are not sweetened, the nest inspires an appreciation of all of its elements which can be tasted so fully in every bite (that’d be one bite, if you’re Dan).

I love to use ground raw pistachios with no sugar added in the nests because they are incredibly vibrant in color, and the pure, utter pistachio flavor is heavenly. Normally I toast every nut I come into contact with, but here, with pistachio, raw is the way to go. Oh, and I almost forgot a huge attraction of the baklawa nest! It’s spring! Birds are making nests! There is Easter joy! We are filled with new life, and how about a pistachio baklawa nest to celebrate?!

Maureen Abood
You will need a ¼-inch wooden or metal dowel, cut to about 13 inches long, to shape the phyllo. These can be found at any craft store, such as Michael's. Pushing the dough into an accordion on the dowel is the trick here; give yourself several tries to get this down. Be sure to keep the phyllo well-covered; dry phyllo will crumble while shaping. Make as many nests as you like, as there will be plenty of clarified butter, syrup, and nuts with some of each leftover. Save for another use or another batch at another time. Read through the instructions a couple of times and review the photos before starting. There are also many videos to watch of shaping the nests on YouTube!
Print Recipe
Servings 20 nests