Bulgur is a staple of Lebanese and Middle Eastern cuisine, used in dishes like tabbouleh. This grain one of the healthiest you can eat for its nutrient-rich qualities. Find bulgur, both fine and coarse, here. 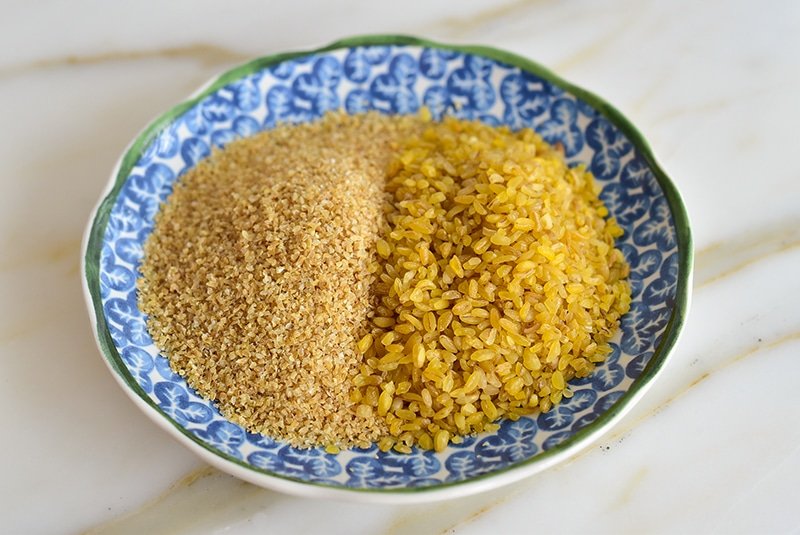 Bulgur is a staple of Middle Eastern cuisine, as it has been for thousands of years. This “cereal” is made from wheat, most often durum wheat. The little granules are cracked, which is why bulgur is also often called cracked wheat. But bulgur, unlike cracked wheat, is parboiled, which means it cooks quickly (or does not have to be cooked at all, as with fine bulgur). This process gives bulgur its distinct yellow tone. Freekeh, roasted young green wheat, is not parboiled.

It is available in different-sized granules, typically indicated by #1 through #4, from fine to coarse. Fine bulgur, #1, is used for dishes like tabbouleh and kibbeh. Coarse bulgur, #3 or #4, is used for dishes like mujadara and other pilafs. The flavor of bulgur is very subtle, and with its ease of preparation, it is one of the most versatile grains. This grain may be best known as one of the ingredients in tabbouleh, the Lebanese herb salad of parsley, mint, onion, tomato, lemon and fine bulgur. Highly! Bulgur, unlike white rice, is packed with vitamins, minerals, and fiber. A cup of cooked bulgur provides about 5 grams of protein, similar to bran and more than oatmeal. Bulgur is a low-calorie, nutrient-rich grain that is known to promote gut health and overall physical well being.

How to cook bulgur.

Preparation of bulgur depends entirely on whether it is fine or coarse. Fine bulgur is typically softened with water rather than cooked. The ratio is about 2:1 liquid to bulgur, but my recipes ask for rinsing the bulgur to remove starch and then cover by about an inch with cool water. Soak for 30 minutes. Any excess water should be squeezed from the bulgur before using in dishes like tabbouleh and kibbeh.

Because it’s already partially cooked, bulgur cooks quickly and easily. Coarse bulgur is used for pilafs, in soups, and as a base for salads. Use 2 cups of liquid to 1 cup of coarse bulgur, which cooks in about 15 minutes. A fat such as olive oil or butter is melted over medium-high heat, the bulgur added and stirred until toasty, then liquid and salt are added. Cover and cook until the liquid is absorbed and the granules are softened. Drain any excess liquid and fluff the bulgur with a fork. Bulgur can be stored in the pantry at room temperature. Be sure to store bulgur in an airtight container away from light.  Buglur stays fresh-tasting for up to one year.